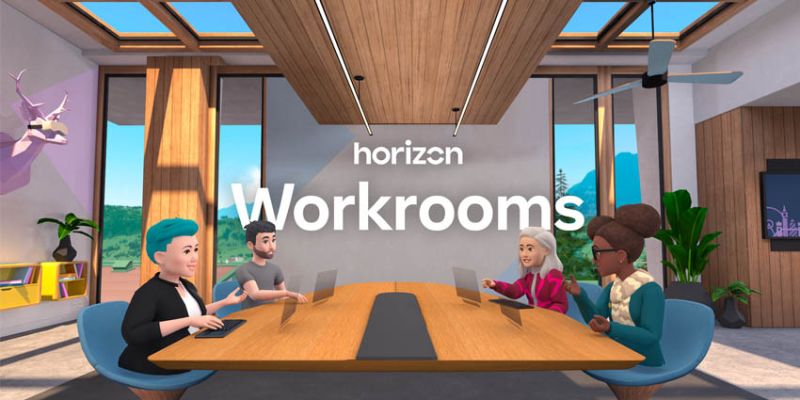 Horizon Workrooms is a virtual meeting space that can be joined by VR or video call, where colleagues can collaborate via virtual whiteboards.

The VR component of the app is available in countries where the Oculus Quest 2 VR headset is supported.

Facebook said in a blog post: “Workrooms is our flagship collaboration experience that lets people come together to work in the same virtual room, regardless of physical distance.
“It works across both virtual reality and the web and is designed to improve your team’s ability to collaborate, communicate, and connect remotely, through the power of VR—whether that’s getting together to brainstorm or whiteboard an idea, work on a document, hear updates from your team, hang out and socialize, or simply have better conversations that flow more naturally”

The mixed reality components of the platform let users see and use their keyboard while in virtual meetings.

The Oculus Remote Desktop companion app also lets users bring files from their computer into the collaboration space.
Participants using VR in Workrooms will appear in a room with each other as customizable avatars, while spatial audio means users will hear their peers’ voices from where they are situated in the virtual space.

Attendees not using a VR headset will appear in a video tile, similarly to how they’d be shown in a standard video meeting.
The Oculus handset can be used as a pen to write notes, either by writing across the physical desk in front of users or at a virtual whiteboard. Whiteboards, notes and files are stored in the room for as long as they are needed.

Facebook stressed that none of the data recorded in Workrooms will be used to personalize ads on the main Facebook platform.

Facebook and third-party apps will also not have access to any images recorded by the Oculus headset, and participants are not able to see each other’s screens unless a user has chosen to share it.
Workrooms supports up to 16 people in VR conferences and up to 50 for video and dial-in calls.

It is currently in open beta. Stay tuned for more information.