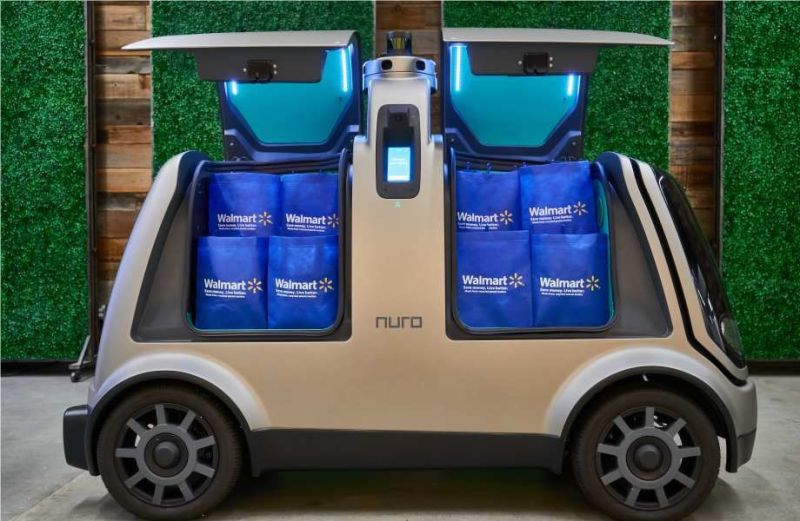 Self-driving and autonomous vehicles have been all the rage those past few years. But it’s only recently that companies are starting to incorporate the technology into their business model.
Instead of passenger transportation, self-driving cars are starting to be used for safer, more efficient, and on-time delivery offerings.

Domino’s has been adamant about offering driverless pizza delivery for years now. Their first attempt in 2016 with Domino’s Australia didn’t go so well. The company tried again in 2017, but the results were far from autonomous, as the cars were still operated by Ford engineers remotely.
It wasn’t until 2019 that Domino’s came closer to its goal by working with Nuro, the company started by two former Google Engineers. Together, they were the first to receive approval from the US Department of Transportation.

While far from ideal, Domino’s now lets customers place prepaid orders on its website on specific days in Houston, Texas. A Nuro R2 self-driving robot car will then deliver the pizza order directly to the customer’s home.

It’s Not Just Domino’s
With COVID-19 putting more pressure on e-commerce businesses and restaurants, many companies are experimenting with self-driving cars to ensure they can handle all the orders they receive.

Walmart is another big name that’s adopting self-driving delivery vehicles. This time, it’s partnering with multiple tech companies. Similar to Domino’s, Walmart is working with Nuro to deliver groceries to customers in Houston.

In 2020, Walmart made its plans to partner with Udelv, Waymo, and Gatik for all-electric delivery vehicles in Scottsdale, AZ.
By December 2020, Walmart had also received the Arkansas State Highway Commission’s seal of approval, allowing it to operate without a safety driver onboard its delivery trucks.
Now, Walmart offers delivery service seven days per work, with self-driving vehicles following a set delivery route multiple times daily.

In-house, Amazon designed its own vehicles. Amazon’s Scout vehicles are six-wheel, autonomous robots that worked during the COVID-19 lockdown.

The Future of Self Driving Delivery

As of now, many brands are rolling out their self-driving delivery services in select locations. They also tend to charge delivery fees to cover the costs of remote emergency pilots for the cars. But as technology evolves, you can expect self-driving cars to be soon available in numerous major cities worldwide.