Blog > Wearable Technologies and What They Mean to You

Wearable Technologies and What They Mean to You 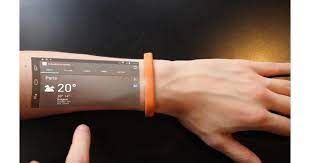 From fitness trackers to smart glasses, technology is progressing faster than ever. Devices are getting smaller and offer ever-greater capabilities. It is almost impossible to go through a day without spotting wearable technology.

Wearable technology, or simply “wearables”, defines electronic devices that can be worn as accessories. They collect data, track activities and customize the user’s experiences. These hand-free gadgets are worn or can even be implanted or tattooed on the user’s body.

How Fitbit and GoPro changed the game

When one thinks of wearable technology, fitness trackers usually come to mind. The original Fitbit activity tracker was released in 2009. Why was it revolutionary? The founders of Fitbit saw the potential of using sensors in wearable devices. The Fit Tracker clipped to clothing and would track calorie burn, movement and sleep.

Another wearable success story is of the brand GoPro. Filming from the athlete’s perspective used to be a complex, expensive and uncomfortable process. Today, thanks to GoPro, anyone can take action shots and share their experience from their point of view. Launched in 2004, the first GoPro was a 35mm film underwater camera with a wristband attachment.

Both Fitbit and GoPro created new products that answered consumers’ needs, paving the way for wearable technology as we know it today.

Smart clothes might be the next big thing in wearable technology. Not only do these devices need to be at the cutting edge of technology, but their design must also be attractive and practical to be a success.

Here are some examples of wearable clothes:

What trends for wearables in the future?

With 5G allowing higher speed and access to even more data, wearable technology shows no sign of slowing down.
As alternative reality is becoming cheaper and more accessible, AR gadgets will become more accessible. Devices that focus on health and safety are a priority for wearable developers. With Covid-19 still going strong, detecting diseases and health issues is becoming a priority for developers.